We use cookies on this site to enhance your experience

By clicking any link on this page you are giving your consent for us to set cookies.

No, I want to find out more


A link to reset your password has been sent to your email.

We need additional information from you. Please complete your profile first before placing your order.

Done! Check your inbox
We've sent your login and password to email@domain.com

There was error during payment

Do you want to fill out this registration fields with this data?
Yes No

// content with table of who and when downloaded files

WEBINAR: Exploring the Growth and Future Development of Open Access Publishing in China

Register now for the webinar 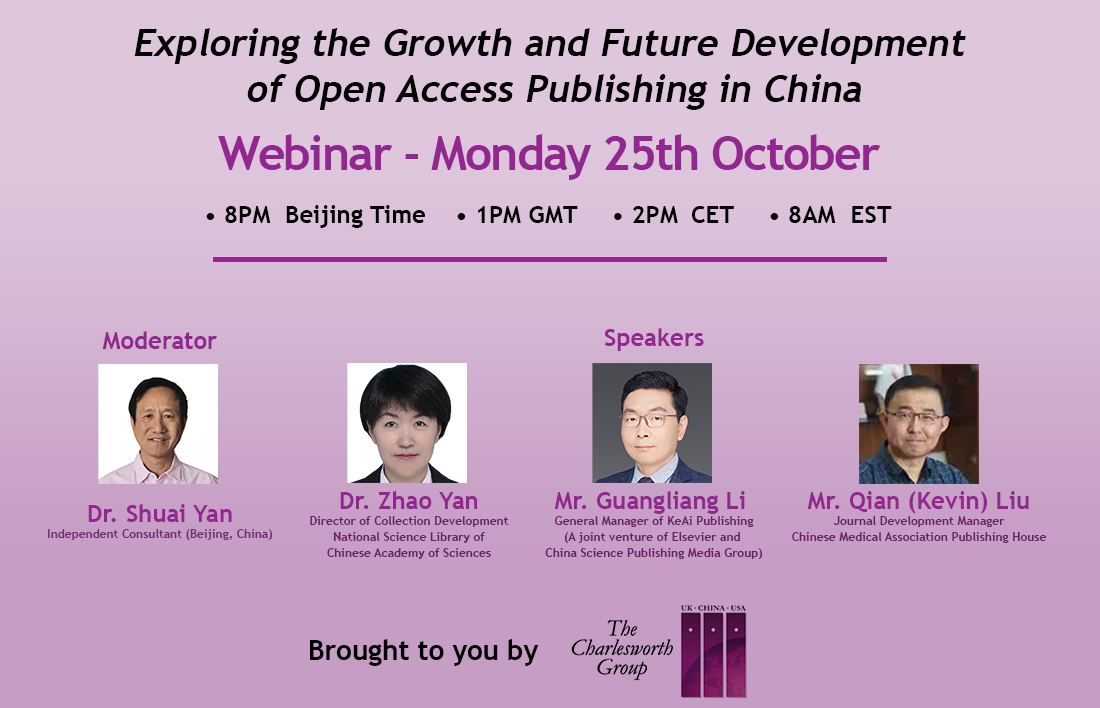 Dr. Zhao Yan oversees systemwide licensing, open access publisher agreements, and is responsible for the negotiation, licensing and management of shared digital materials for CAS Institutional libraries. Since 2013, she has held several roles related to advancing open access in the scholarly communications system, including leading SCOAP3 working group in China, engaging more Chinese parties involved in the OA2020 initiative, implementing open access policies and transformative agreements in CAS. She is also the member of both the Government Council and the Executive Committee of SCOAP3.  She earned her Ph.D. in Information Science at University of CAS.

Mr. Guangliang Li joined RELX (parent company of Elsevier) as Government Affairs Director of China in July 2020. Prior to that, he worked with Shanghai Jiao Tong University Press gaining 12 years of experience in academic publishing, and his last position was Editor-in-Chief.

Mr. Qian（Kevin）Liu graduated from Medical School, Shandong University. In 2004, Kevin entered Shanghai Institutes for Biological Sciences (SIBS), Chinese Academy of Sciences (CAS), where he worked in Acta Pharmacologica Sinica (published by Blackwell) as an assistant editor. In 2008, Kevin moved to Tianjin Medical University General Hospital to run Chinese Journal of Lung Cancer. In 2010, together with other experts, he launched Thoracic Cancer as the managing editor with Wiley-Blackwell. In 2016, Kevin took the role as managing editor of Asia-Pacific Journal of Clinical Oncology. Kevin is an experienced medical editor and knows Chinese medical journals well. Kevin is also a Wiley’s Open Science Ambassador.

Register Now for the Webinar